I have the feeling, that we are only starting to understand the scientific, but above all philosophical implications of quantum mechanics.The biggest impact will be on our interpretation of reality. Quantum reality is very, very different from classical reality.

Or will we simply stick to a non-creative, but human, storytelling type of art?

Around 1514, Nicolaus Copernicus formulated his heliocentric model (“Not Earth but the Sun is the centre of the Universe”). Just before his death in 1543 he published De revolutionibus orbium coelestium, which triggered the Copernican Revolution, and contributed strongly to the Scientific Revolution. And human life would never be the same. Yet, daily life hardly changed in those days – except maybe that of the (then) pope. It took a few centuries. (And, of course, by now we know, that even the Sun is not the centre of the Universe.)

In 1924, Werner Heisenberg wrote down a thought. In his studies of electrons, he decided no longer to describe the movement of an electron, but merely the ‘observables’, ic. the intensity and frequency of the light emitted by the electron. As a logical consequence, the observed electron could no longer be bound to one exactly defined location, but must be – with specified probabilities – in multiple places at the same time. A phenomenon now called ‘superposition’.

Just like with Copernicus’ ideas, initially Heisenberg’s ideas were rejected. But during the years more and more evidence started to pile-up, confirming his thoughts. Those ideas formed the basis of what is now called quantum mechanics, broadly worked out by Niels Bohr and others, and initially heavily criticized by Albert Einstein and others.

I have the feeling, that we are only starting to understand the scientific, but above all philosophical implications of quantum mechanics.The biggest impact will be on our interpretation of reality. One example is scientific research on the relationship between consciousness and quantum effects. Quantum reality is very, very different from classical reality — just like reality in Copernicus’ world was very different from the then leading ideas about reality.

(Why this quantum revival now? Because the next ten odd years, we will hear a lot about technical breakthroughs in quantum computing.)

Yet, on the other hand, I am too much a physicist to be very spiritual about this; there is a huge risk of “quantum flapdoodle”, as the well-known physicist Murray Gell-Mann called it. Quantum reality is part of what I called “scientific reality” in an earlier story. Quantum physicist Carlo Rovelli once explained it like this: if you would look at Earth from, let’s say, the Moon, you would see our oceans as one very flat (ie. predictable) surface. If you would zoom in, you would see the waves, behaving chaotically (ie. unpredictably).

The discovery that Earth circles the Sun, didn’t change daily life in the 16th century. The same is the case with quantum. It doesn’t change our daily reality, but it does change our perception and understanding of reality at large (ie. all levels together): that our intuitive interpretation of reality (daily life) is just that, our subjective interpretation, strongly driven by the workings of our brain. Quantum phenomena and effects like the uncertainty principle, superposition, entanglement, tunnelling, the observer effect or duality are not observable at (our daily) macroscopic scale. So, please, let’s not make it more mysterious (spooky, romantic?) than it is. “Beam me up, Scotty“ will not be part of our daily experience … but quantum computing will be, one day soon.

Now, of course, after attempts by romanticism, impressionism, cubism, etc. to escape the limited ‘realism’ interpretation of reality, post-modernism has implicitly been an artistic interpretation of quantum mechanics: “there is no objective reality (uncertainty), the beholder’s share as part of an artwork (observer effect), art is a means to escape from the limitations of reality (quantum reality)”, etc.

Yet still, like with the ideas of Copernicus, despite the fact that the original ideas around quantum are already a hundred years old, I think we are only starting to understand the consequences of quantum as a new way of looking at reality.

Or … will the current wave of AI, Artificial Intelligence, dominate our perception of reality? Will “AI Art” be the next big thing in art? The dominant art school of the 21st Century? 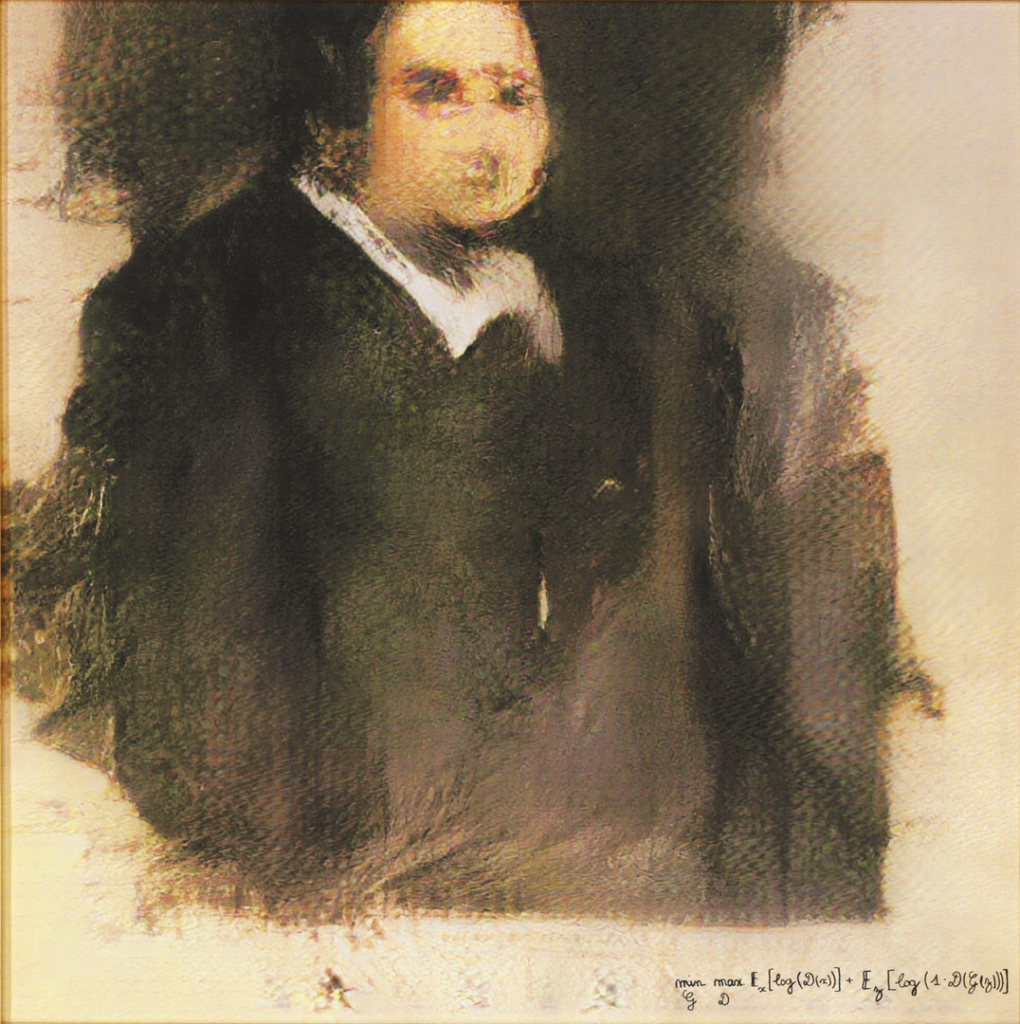 Edmond de Belamy is an example of “AI Art”. It is a generative adversarial network (GAN) portrait painting constructed in 2018 by Paris-based arts-collective Obvious; printed on canvas, the work belongs to a series of generative images called La Famille de Belamy.

So, is Quantum Art “an idea whose time has come”? Will Quantum Art turn out to be bigger than the current wave of “AI Art”  or “Deep Art” (after ‘deep learning’, an AI technique), art by means of or supported by artificial intelligence? To me, one thing is sure: quantum is way more fundamental in its impact than artificial intelligence (AI) will ever be. (Not to say, that the impact of AI will be small, it will not.)

And, if so, what will Quantum Art look like?

This whole discussion comes down to the question, whether AI, Artificial Intelligence can be creative. Because of how AI works. All it does is recognize patterns in data and recognize/continue those patterns (like linear regression). In other words, whatever AI ‘creates’ was already in the pattern of the data. Not creative, one would say.

But then, the Blank Slate question arises: how creative is the human brain, really? Doesn’t every artist, however famous or ‘brilliant’ (whatever that is) or ‘creative’ (whatever that is, too) ultimately build upon the work of their predecessors? More of the same. Add a little twist, add a personal voice and continue that a life long (in an almost autistic way)? I’d say for 99% of all artists that is certainly true.

So, how about the 1%? The Jheronimus Bosch’s, Vincent van Gogh’s, the Marcel Duchamp’s, the Marc Chagall’s, the Salvador Dali’s? The misfits, the square pegs in a round hole? How creative were they, really? Creative, as in “create something that didn’t exist before, as a whole or pieces of it”?

And, can Artificial Intelligence ever be creative in that sense? Or even, can it be creative it the way Bosch, Van Gogh, Duchamp, Chagall and Dali were creative (if we call them ‘creative’)?

I guess, in the first place it comes down to the question how we define ‘creative’. What percentage, if you will, of the work has to be new? And how do we define ‘new’? Can a new combination of existing elements be considered new, hence creative? If so, can the continuation of a pattern (in data, for instance) that results in a new configuration – of spats of paint on a canvas (eg. Deep Art), for instance, or of words in a text (eg. Verse by Verse) – be considered creative? Or you type some words and select a style, and the AI creates an “artwork” (Wombo).

And if so, when do we call such a creative ‘continuation of pattern into a new configuration’ art? When we like it, when we find it beautiful, when someone is willing to pay for it, when it becomes famous, when it is exposed in a museum, when … art experts say it is art?

And the really interesting question here is, whether Quantum Art, more that AI Art, will be able to bring real creativity on the table, more than the human brain has been able to do so far, or will ever be able to do.

Or is it all going to be a matter of new interpretation, like Duchamp did: “no absolute truth in art; no juries, no rejections”. The beholder’s share: creative is whatever I feel is creative, and art is whatever gets paid millions for … the end of art as we knew it?

Whether created by an AI system, based on quantum or traditionally created by a human being, we call it art – despite artistically being a not so creative variations of earlier artworks – as long as the beholder sees a fantastic human (hopeful), personal story in it, that makes it a form of art.

(August 12th, 2022) – And here’s an interesting article criticising AI Art. It is about the image generating algorithm DALL-E: “Image-making becomes searching, like a visual version of Borges’s “Library of Babel,” the story about an infinite library where every possible combination of letters is printed in never-ending volumes. The greatest works of literature already exist somewhere. The denizens of the library just have to find them.”

(Sept 21, 2022) – A lot is being written about AI art, these days. Here’s an interesting example in The Verge: ‘An engine for the imagination’: the rise of AI image generators

(November 4th, 2022) – Another interesting article I found on integrating quantum theory into the humanities, especially focusing on consciousness: Transdisciplinarity and Consciousness: Toward an Integrated Model

And another interesting discussion about consciousness and free will. Is libertarian philosophy Correct in that we have total free will? Is deterministic philosophy right in that everything is causally determined? Or is it something in between? One thing seems sure: AI algorithms are deterministic, hence, AI has no free will. AI is just a piece of software based on training datasets: change the dataset, change the outcome of the algorithm. What seems to be missing in this article Consciousness as a Memory System is the quantum view.