The Basis of the Basis

The Basis of the Basis

Understanding ourselves starts with understanding the brain. To me it’s the basis of the basis, the foundation. Our brain creates our reality. We are (what) our brain (makes of us). There probably is a universal reality; yet we will never experience it first hand, but always through the filtering and interpretation by our sense and our brain.

I have three questions: why do we keep on doing unwise things, why do we always react the way we do, and how can we change our behavior. In my view the answer lies in three principles: the eternal conflict between ratio and emotion, the effect of a stimulus on our response, and the degree of changeability vs. rigidity.

During a few years, I have studied neuroscience, out of personal interest. Of course, the work of popular scientists like António Damásio and Steven Pinker, I find very intriguing, but there is much more interesing research of less popular scientists.

Anyway, from my studies, I have drawn three basic principles about the workings of the human brain, hence, about us: the way we think, feel and act. These three principles are:

Everybody intuitively understands the notion of ratio and emotion: thinking and feeling (including intuition). But where do they come from?

Well, there is something very interesting about the brain. It’s structure. You might expect that the brain as an organ would have a pretty uniform structure, like eg. a kidney or a lung. But it doesn’t. There are clearly discernable parts in the brain. Neuroscientist Paul MacLean coined the idea of the triune brain, identifying several of those parts. You may be familiar with the term ‘reptilian brain’ as one of those parts.

Two things I find especially interesting. In the brain, there is a part called the (neo)cortex, including the prefrontal cortex. And there is a part called the limbic system, including the amygdala, the hippocampus, and – for some scientists – parts of the brainstem. And there are other separate parts, eg. the cerebellum. Now, I know that modern insight in neuroscience is that “everyting in the brain is connected to everything” through billions of synapses. Still, roughly speaking, one could say, that ratio comes from the cortex, and emotion comes from the limbic system.

Then, what I find particularly interesting is the word ‘neo’, which is Latin and means ‘new’. In the evolution of our species, the (neo)cortex has evolved much later than the limbic system. Apparently, evolutionarily speaking, it was more advantageous for our species to create a new part in the brain (neocortex, including prefrontal cortex), than to grow the old (limbic system, cerebellum) even bigger – like in an elephant’s or whale’s brain.

Now, my key point is this: the old and the new parts of the brain should work together seamlessly, but they don’t. It is a great, nevertheless far from perfect solution by evolution. They seem to be at war … a lot.

Theoretically, ratio should be the most effective instrument that we have – if you assume that the purpose of the brain is survival of our species through survival of individuals. But not always. Sometimes ratio is too slow (see Daniel Kahneman’s great book Thinking, Fast and Slow), then we are forced to trust our intuition. Sometimes the world is too complex to understand; then we create mind models to get to grips with the world by making our own subjective interpretation of it so that at least we have the impression of control and predictability. Sometimes the world is too threatening and scary. Then we create a mind model, a rosy dreamworld in which things are not so bad.

Note. In 2017, Daniel Kahneman made very interesting remarks in this respect about artificial intelligence. The basic idea (in my words): what if our ratio would be (much more) perfect? Would we then still have to rely on emotions? Would we then, still, make all the “thinking errors” (emotional biases) that we make now? Kahneman believes, that within a few decades artificial intelligence will be that smart! Then, the role of humanity will change dramatically. Our future. Exactly this is what I mean, when I say that with my art “I try to find a way to merge the realities, that we create to shape ourselves, into a futuristic interpretation of reality in the age of artificial intelligence and other disruptive technology, hence accepting a totally new form of limitation: our position in the evolutionary grand scheme of things.”

On the other hand, I am convinced that – the way we are today – without emotions, we would not survive. It is our emotions that drive us, that drive the things we do, that determine how we see ourselves, that keep us standing, that motivate us, that depress us.

Eg. basic emotions – based on David Rock’s SCARF Model – such as need for status (our social position in the pecking order of the groups that we belong), need for certainty (a degree of predictability of key events in our life), need for autonomy (the freedom to a degree to determine ourselves what we do and act in our individual interest), need for relatedness (the safety of a limited number of people who we can really trust and build upon) and the need for fairness (being treated equally to other people in the same circumstances, being treated according to ethical principles).

Or David McClelland’s Expectancy Value Theory of Motivation in which motivation is “a recurrent concern for a goal state or condition as measured in fantasy, which drives, directs and selects the behavior of the individual”. Basing his work on the work of Henry Murray, he focused on three particular motives: the need for achievement (N-Ach); the need for affiliation (N-Aff); and the need for power (N-Pow). N-Ach is the desire to excel in relation to a set of standards. It is the drive to succeed. N-Pow is the desire to be influential and affect an organization. N-Aff is the desire for close personal relationships. McClelland’s three needs, are non-sequential, but instead are used in relation to each other. (Quoted from Wikipedia; in my previous career, I was trained as a leadership trainer and coach for senior management, based on McClelland’s insights and have done lot’s of Thematic Apperception Tests – TAT’s – with candidates.)

So, it’s ratio AND emotion. But how? That is what I want to explore in my art. 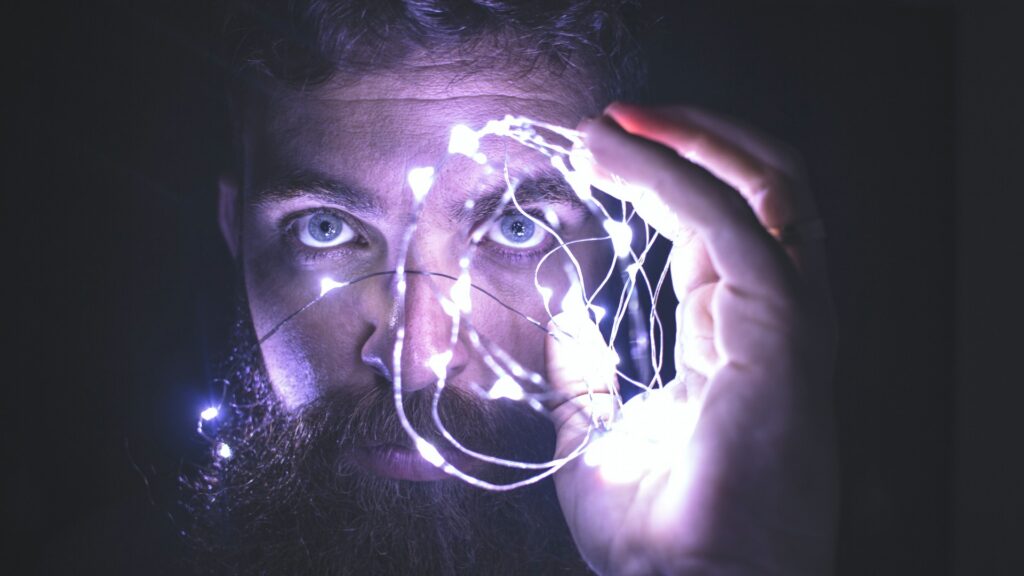 Then, there is the process of how we use ratio and emotion in our interactions with the world. It is interesting how many of us want to be free. But the ultimate form of freedom would be to live on an uninhabited island, alone, on our own. Well, interesting experiments have been done in this respect. I remember a case where a French man tried to live alone on an island for a year. He almost went crazy of loneliness. At one point, he caught a wild boar, but then decided not to eat it – despite being really hungry – but to keep it as a pet for company. And, yes, he did talk to the boar all the time. After nine months he asked to be taken off the island, desperately. He did not make the full year around. Said differently, we are fundamentally a social creature, with a huge need for affiliation and affect.

But groups or individual human beings also can be threatening to a person. And the world and our environment can. So, we need to protect ourselves. At the same time, there is opportunity for personal improvement in the world outside. So, we must use our brain to identify risks and chances.

The basic process is simple. It takes place in three steps:

The really interesting part here, obviously, is the mental model that contains these ‘rules of engagement’. Each individual human being seems to have a slightly, and sometime largely different mental model of the world. How do our mental models come about? Clearly, nature and nurture play a role here. Experiences (‘unintentional or accidental nurture’) too.

I said in an earlier story that mind models come in a large variety of degrees of ‘reality testing’, from realistic to unrealistic, from healthy to unhealthy, from what I called (i) scientific realities – all the scientific models, such as the Standard Model in particle physics, that is currently being revised based on new insights from experiments – to (ii) humanistic or group realities – all the humanistic models, such as small group, large group social and economic constructs, eg. money or religions, up to (iii) ‘unrealities’ or personal realities, such as hope and fear, dreams, day dreams, wishful thinking, white lies, cognitive dissonance, willingly believing untruths, and psychological disorders, such as compulsive behavior, neuroses, shock, PTSS, delirium, autistic behavior, delusion, psychosis, schizophrenia, up to sheer madness.

My key take-away here is, that our mind model(s) determine how we respond to incoming stimuli. How exactly? Again, that is what I want to explore in my art.

Some people say, you cannot change someone’s brain, hence, their behavior or character. These are both supposed to be very rigid, by some. Character, I don’t know (depends on how you define it in the first place), but behavior, I’m sure can change.

Clearly, through evolution, our brain structure does change. But that process is extremely slow: it takes thousands if not millions of years, and we have no clue of how to steer that process. Much faster processes may be epigenetics (heritable phenotype changes that do not alter the DNA structure) or the scientifically disputed Lamarckian inheritance (passing on physical characteristics to offspring that parent organisms acquired through use or disuse during their lifetime). But these are also much too slow for practical application on a daily or even annual timescale.

Yet, it may be crucial to change the way we act, individually and collectively, fast. Some people, individually, are not always doing themselves a favor in their actions, up to some people who are straight self-destructive. Eg. people who smoke cigarettes, knowing that it is unhealthy. Instant gratification, yes, I know! But that will ‘only’ damage those individuals and likely their loved ones. A bigger issue is our collective behavior. We are destroying our planet through global warming; we have created societies that are largely unfair to millions if not billions of people. All based on our behavior, based on our mental models. Read eg. the books of Yuval Hariri.

So, we must find a way to – individually and collectively – change our behavior. For me, the key is to change mental models. Now, in neuroscience, there is the notion of brain plasticity. Brain cells – such as neurons and glial cells – do starve now and then and new ones can be ‘born’, created. But above all, connections between brain cells can be created and disconnected quite easily. And it is this combination of brain cells and their topology that determines our mental models. So, we can change mental models by altering our brain structure (cells and connections). This malleability of the brain is called “(brain) plasticity”.

A lot of research is being done on how plasticity works. There is no decisive answer yet. But there seem to be three fundamental mechanisms:

The whole process of how mental models come into existence and how we can, willingly or unwillingly, change them, I find extremely interesting.

My take-away here is, that we can change mental models. But what is the most effective way? And should we, in the first place? Again, that is what I want to explore in my art.