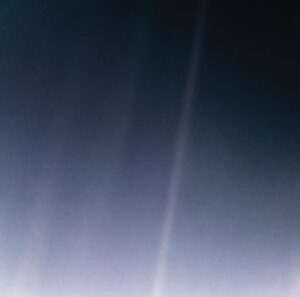 Warm Grounding In Our Rabbit Hole

This art project has not yet started. It is just an idea, so far. The inspiration comes from the epic photograph by Voyager 1 that the famous astrophysicist dr. Carl Sagan called the “Pale Blue Dot”. It must have been around 1990-’91 that Case first saw the Pale Blue Dot image, and it always sticked with him in his mind.

Pale Blue Dot is a photograph of planet Earth taken on February 14, 1990, by the Voyager 1 space probe from a record distance of about 6 billion kilometers, as part of that day’s Family Portrait series of images of the Solar System. In the photograph, Earth’s apparent size is less than a pixel; the planet appears as a tiny dot against the vastness of space, among bands of sunlight reflected by the camera.

Voyager 1, which had completed its primary mission and was leaving the Solar System, was commanded by NASA to turn its camera around and take one last photograph of Earth across a great expanse of space, at the request of astronomer and author Carl Sagan. The phrase “Pale Blue Dot” was coined by Sagan in his reflections on the photograph’s significance, documented in his 1994 book of the same name.

The importance of the photograph goes way beyond science. The Pale Blue Dot changed the collective mind model about ourselves as a species, as Earthlings! It led to a significant moment in our collective realization about our existential loneliness and total smallness: planet Earth is our tiny rabbit hole in the vast, empty universe surrounding us. Together, we are on our own.

Other inspiring legendary photographs of our planet are eg. Earthrise (168) and Blue Marble (1972). Courtesy NASA. 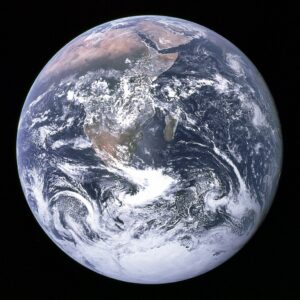 (*) Note. This specific Pale Blue Dot image is the 2020 improved version of the original 1990 photograph.

About the three images:

So how do Eartrise, Blue Marble and Pale Blue Dot relate to Rabbit Hole? Should be obvious by now.

Earth is our little rabbit hole in the vast universe. Our only hiding place from the universal forces, such as black holes, galactic collisions, cosmic radiation or simply a large asteroid, that could easily destroy us in the blink of an eye, like we can easily kill an ant by simply stepping on it, even without ever knowing we did.

The biggest event in human history clearly would be the discovery of extraterrestrial life, but so far – despite the Fermi paradox – there isn’t the slightest sign of it, beit humanlike or even a bacteria. So far, we’re alone in a huge empty space … (jokingly, Case once suggested that we never have or will get a sign of aliens, because the undeveloped simply don’t have the technical means to communicate with us and the very developed already destroyed themselves through misuse of their advanced technology … )

The artworks of this art project should relate to this – collectively still dawning – reality of universal loneliness as Earthlings, and what we can do to take that feeling away: create a feeling of warm grounding on our pale blue dot.

And that is exactly what I intend to do with this art project: bring joy from beauty, and affirmation of who we are – identity and meaning through narratives, both individually and as human beings; attempting to reduce existential loneliness, by helping us feel that we belong in the life that we want to live: ‘Warm Grounding‘.

Get updates about this project and more

Sign-up for my newsletter. You can unsubscribe anytime. Data are processed according to GDPR.