Recently, I read an interesting vision on the future by the futurist of Philips Electronics. He sees four possible futures for mankind: Two where humans engineer our own evolution (“transmutation”), and two where we adjust to our environment (“transformation”).

In transmutation, he sees two possibilities: either we ‘leave the material world’ and start living entirely in the virtual world, eg. the metaverse (“Etheria”) and a trans-humanistic one where we engineer our DNA (“Immortalia”) to fully ban diseases and death, living forever as an individual.

In transformation, he sees  two possibilities: one where we succeed to forever live in balance with our planet (“Habitania”) and one where we are just a small step in evolution and one day will cease to exist as a species (“Gaia”):

Etheria
Etheria is the movement based on a sentio-centric world view, which places the progress of consciousness and the power of the mind above all else. A future in which man will live on without the need for a biological body. Man as homo cyberneticus.

The transformation path with a preventive mindset
The transformation path responds to the perilous state of our natural ecosystems and is about a transformation of the way we live, consume and produce. It is about post-anthropocentric futures. Futures that go beyond humans as the center of everything. People with a preventive mindset are convinced that through coordinated human action, cooperation and system change, people can prevent the apocalypse of climate change and the collapse of natural ecosystems. Here too are two possible directions:

Habitania
Habitania is the movement that believes in resource-centrism. It is the search for creating sustainable prosperity by using natural resources as efficiently as possible and not exceeding the agreed planetary boundaries.  It is actually a future that still puts human needs first by striving for a good standard of living with an awareness of the need to keep the planet healthy as well.

Gaia
Gaia is the movement that believes in ‘ecocentrism’ and sees all life and the planet as one system. It is a future that forces us to look at our place in the ecosystem and realize that we are part of a larger ecosystem. Gaia emphasizes the natural dynamic balance and interaction between all living beings and the geological ecosystem.

Here’s an image of the four futures: 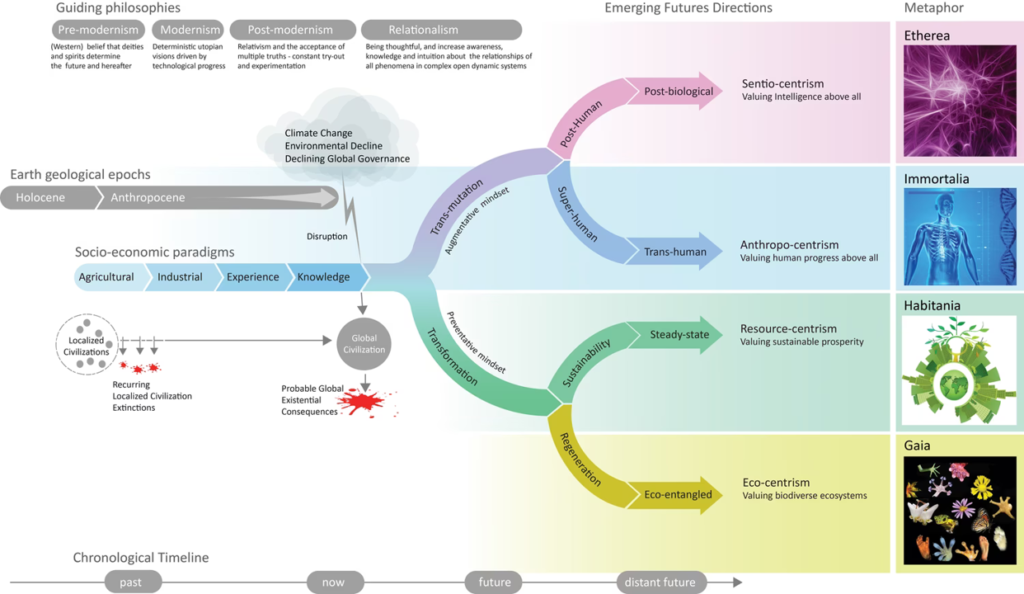 If you know my thinking a little bit by now, you won’t be surprised that I believe that it will be infinitely attractive to us as a species to go for the second of the four futures, Immortalia. We will try to rule over our planet, our solar system, and beyond. And we will try to engineer ourselves into Homo Deus, as Yuval Harari has called it.

I’m not saying that it is the best, most successful or most desirable scenario. I’m just saying that, knowing ourselves, this is what we will try. In fact, we are already on that path, we have been for many centuries now.